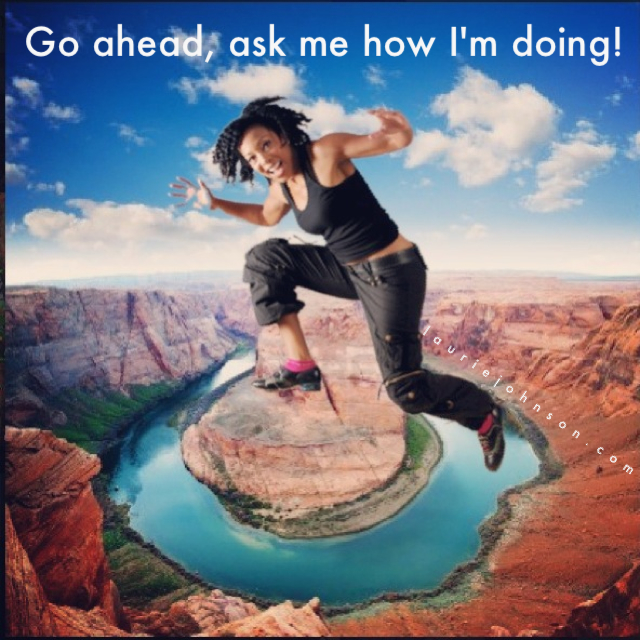 As Grand As The Canyon: Positive Thinking

As a teenager, I never had anything good to say. I was so cynical that family and friends complained to me about my attitude.

They cited specific examples of things I would do or say to prove to me I was a total ”battery drainer.”

Cynicism had become a way of life for me, it was all I knew.

A negative mindset results in negative living, and that’s exactly why my life was so miserable.

I made a conscious choice to deliberately create positive energy by responding to the question, ”How are you?” in an upbeat, optimistic way.

I answered with one of the following expressions:

One day I got carried away and actually said, “If I were any better, there’d be two of me!”  It was a bit much but you get the idea, right?

Initially, people might look at you like you’re not serious or that you’re lying. But it won’t be long before your responses become second nature.

Optimism builds positive momentum. You’ll also be less likely to follow up such positive words with any negative talk.

Before you know it, people will respond positively to your inspiration.

Why? Because enthusiasm is contagious.

And the best part of this approach is that the downside risk is zero.

If you think you might be suffering from a negative mindset, consider answering a simple question differently. It’s a question we’re all asked several times everyday by strangers and friends alike.

Whenever somebody asked you, ”How ya doin’?” respond and make your life as grand as the canyon.

Witness the little improvements in your everyday world by maintaining an optimistic mindset.

Give it a try.

Experiment with your own positive responses to the question, ”How are you?”