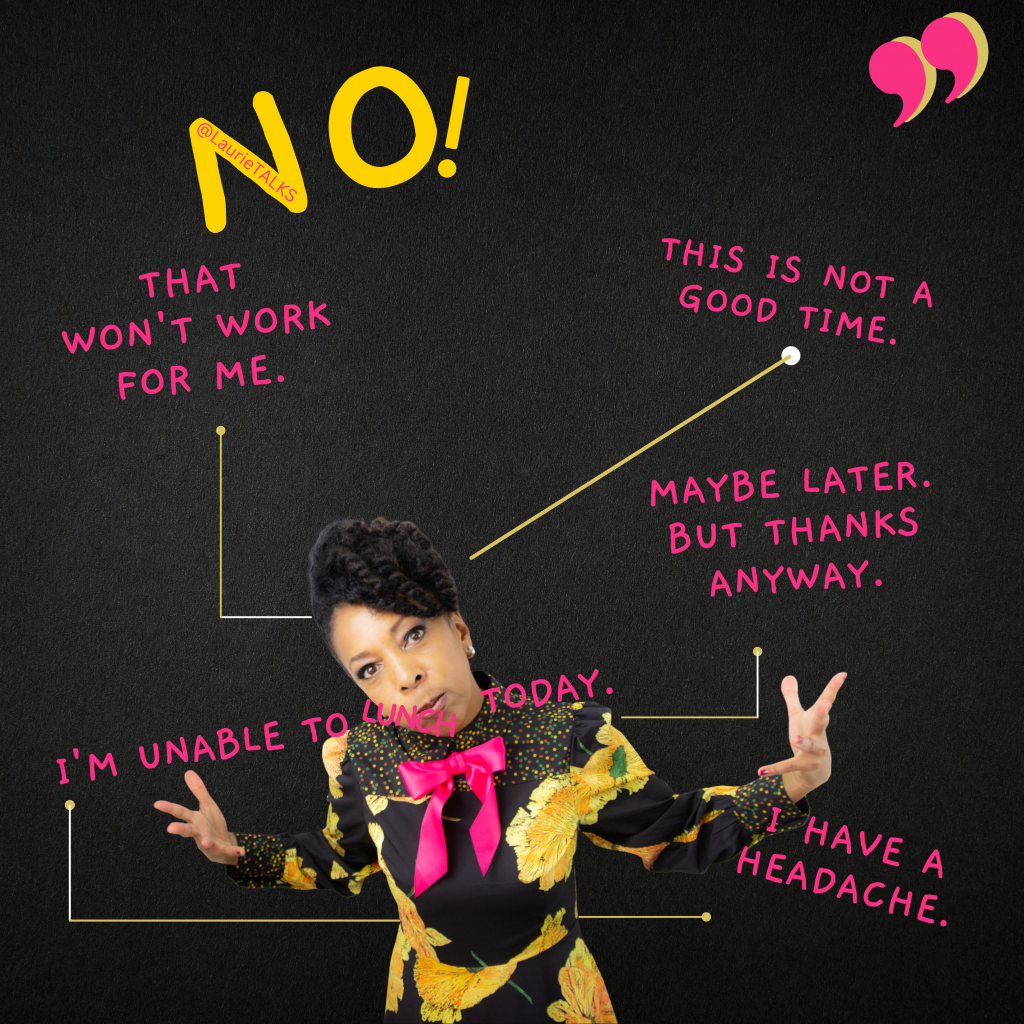 The Year I Said NO

Building up to my year of saying no involved a lot of preparation. I conducted Google searches, watched a few YouTube videos, read a couple of blogs, and role-played out some scenarios.

My goal was to increase my productivity by learning how to set boundaries.

That’s right. The previous year I’d made a promise to myself: I would say yes to everything — within limits, of course.

My plan was simple.

Say yes to social, networking, and business invitations, speak and perform at events and workshops when requested, choreograph dances, say yes to private coaching sessions … or anything else that signaled an opportunity to gain exposure to something new and untried.

It was a very good year. I went new places and saw new faces.

Then my year of saying no began. After that, anytime I heard words like, “Laurie, can you, will you, would you, or could you …” I’d simply reply with an emphatic no.

In fact, my no was so absolute that in some instances people would ask me why I’d replied so abruptly… or so quickly … or so confidently.

The answer was the easy truth.

As a matter of fact, I’m practicing right now.”

And then we’d proceed to have a discussion on the merits of saying no.

These conversations typically ended when I would sign off with, “I’d be honored if you’d get back to me next year.”

Here’s something I learned from this year of saying no: Some people will go to great lengths to entice you to change your mind and get in sync with their agenda or mission.

Fortunately, you gain a kind of mental strength from watching the time and effort they’re investing to convince you that what they want will benefit you.

Consider this Warren Buffett quote: “Very successful people say no to almost everything.”

If you find yourself drowning in opportunities, jumping from one “biggest, best thing” to the next—and doing each of them with mediocre results—consider the power of no.

The word no is a complete sentence on its own. Practice saying no without feeling guilty or offering explanations. But just in case you’d like to add a bit more to your no, here are a few ideas:

Practice so that when the time comes to assert yourself, you’ll be able to say no — or some version of it.

“No. Maybe next time. Thank you.” ~ LaurieTALKS